Showing posts from January, 2019
Show All

The Only Social Network Platform On The Entire Web That Feels Like Home. 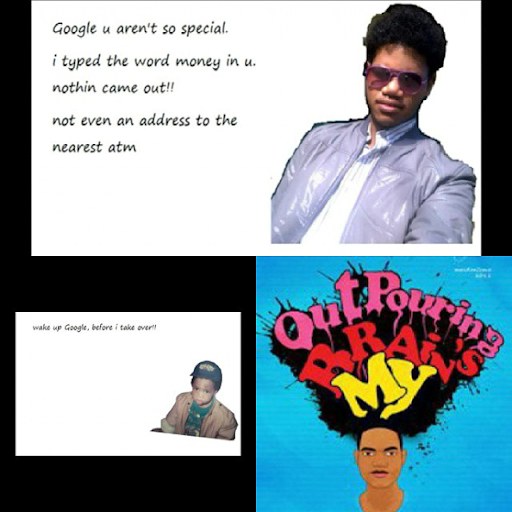 Did i join steem/steemit as a mainstream audience and how was the journey like? I can write an entire book (on-the-spot) answering the above question. First off, in deep truth, i do think a mainstream audience can fathom the extent steem's beauty and in some cases, way more than a tech-savvy audience can. I do think a mainstream audience is easier to onboard onto steem too, than it is 'a tech-savvy audience' and there are valid testimonies to this.  I joined steem as a mainstream audience and i love steem like crazy. I joined when it was filled with bugs too. Flags were rampant and steem got as low as 7 cents. There were few communities, few whales and steem as a blockchain was an unknown concept as it was mostly 'all about steemit', then. I so loved it then, how much moreso now. Listen to the undertone of my introductory post here.... I arrived on steemit and never read the whitepaper. The whitepaper and its every context declared and revealed itself, right h
Post a comment
Read more

Some Things About Fiverr, Freelancer And Upwork, In Relation To The Development Of Steemgigs.org 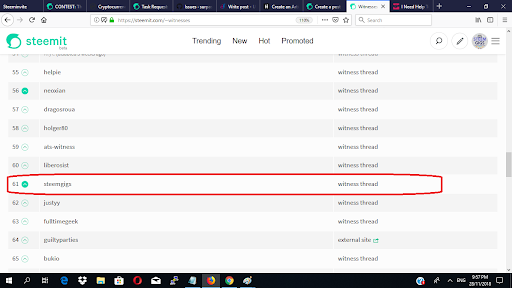 In the past few days, i decided to spend time exploring the likes of Fiverr, Upwork and Freelancer. It is already approaching January 20 and it quite pains me that my last two Ulogs.org task requests ( 1 , 2 ) haven't been completed yet, especially since i intend to begin a health-rehabilitation in February. I went on Fiverr yesterday and tried their custom-request feature. My intention was to try these avenues, to get programmers who would carry out my ulogs.org tasks Prior to yesterday, i have tried the more popular approach on Fiverr, of trying to contact freelancers directly from their database through direct messaging, which wasn't very successful as most of the web developers who responded to me acknowledged that they aren't very familiar with 'steem' or blockchain technology overall. I think places like Fiverr is a nice place to contact programmers and get them onboard steem.  Since i had limited success by contacting programmers directly, i decided to t
1 comment
Read more

Do Understand Now What 'Surpassing Google' Means And Why It Involves 'Suffering Without An Outlet'.

Will you be shocked if i tell you that sometime in this life, i want to create my own programming language, one that every(any)one can code in? Well, don't be! There are many things i want to do, when my health is restored and my life becomes settled. Recall that i have spoken of creating an entire school called ' legit illiteracy ' that every(any)one can school in and recall that i have spoken of an enterprise called ' Macrohard ' many a time. These two enterprises are tied to each other.  In the near term, Macrohard is set to start as a physical hub located in the Philippines (to gather the nations to code with swag); in the mid-term, Macrohard will become an online enterprise that will help build projects using micro-programming;in the long term, Macrohard intends to create a programming language that integrates a swag, a programming language that every(any)one will be able to code in. While this all, may appear ambitious (especially when you consider that
Post a comment
Read more

Continue Watching The Evolution Of Ulogs.org - A Micro-programming Task Request For The Development Of Areas Of Ulogs.org Repository https://github.com/surpassinggoogle/UlogsV2   Ulogs.org blockchain-based social network where everyone can create ULOGS, become "true celebrity" (ULOGGERS), have a community of  "true fans" and earn a variety of rewards and the currency called "steem".  It is a fork of busy.org as well. Thus, being familiar with the busy.org helps.   Quick Note  Yesterday, i wrote a task request here but today, there is dire need to modify the task to reduce its complexity as the prior developers who attempted to contribute to the task, encountered difficulty and bugs and this has slowed the development of the task. A major part of the task, involved adding a new column (fourth column) to all pages across ulogs.org, which originally has 3 columns. During my tests (done to the temporary contributions by the developer), i noticed that for me to view the 4th column that was added, i always had to zoom out by a large percentage. Even after trying to reduce
Post a comment
Read more

The Evolution And Development Of steemgigs.org, A Revolutionary Freelance Services Marketplace, With Free Gigs & Services. 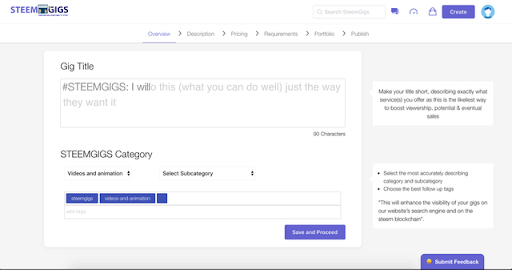 Repository Steemgigs (Front-End)   SteemgigsServer (Back-End)  A revolutionary freelance services marketplace built on the steem blockchain, that 'removes all barriers to entry from dream-building' for entrepreneurs, by implementing an 'untalented & community' paradigm, where 'everyone has something to offer'.    Details This task is a series of micro-programming tasks. The task covers the following: Add Default In-Title Prefix In 17 Post Editors Across steemgigs.org Add Auto-Save & Edit Function To Posts & Comments. Add General Styling To Way Catalogs Of Gig-Cards Are Displayed On All Categories & Sub-categories Across steemgigs.org Search & Categorization Details proper Special notice If you would like to contribute to our project, we are now adopting a new style of contribution.  If you are designated to undertake the entire task or any of the sub-tasks, we would like you to be able to send a PR to our reposit
Post a comment
Read more
More posts